Actually I don’t know which treatment I went for. It felt like both a full body massage and possibly a slimming treatment. It was largely painful and scary, and lasted too long for my liking. It’s not that it’s bad but… just something I didn’t like at all. The therapist was from China and spoke in Mandarin. She had other colleagues who appeared to be foreigners too, but probably from Malaysia as they spoke a little more English. I was in pain most of the time and it was difficult to figure out what they were saying to me. I walked away with a good Mandarin lesson on words related to massage therapy and weight-loss terms. (Here’s a funny one: She said something that sounded like “bee hive organisation” in Mandarin when I broke the words up. In my head I had no idea what it meant and I was so confused trying to figure out what all those sounds strung together could be. Turns out, it means cellulite! HAHA!)

The session started with me having to strip down to my underwear and then being weighed. As usual, they are always shocked to see what I weigh because for some reason I look smaller than the numbers on the scale. The bed was small, the room was a little cramped but well-equipped. The walls didn’t touch the ceilings so you could hear people walking around or talking. There was red heat lamp that shone directly on my belly as she prodded, kneaded, poked, and stabbed (I’m serious! She took a finger and she pressed it all the way down several points in my soft tummy and it hurt like a bitch!). I whimpered. 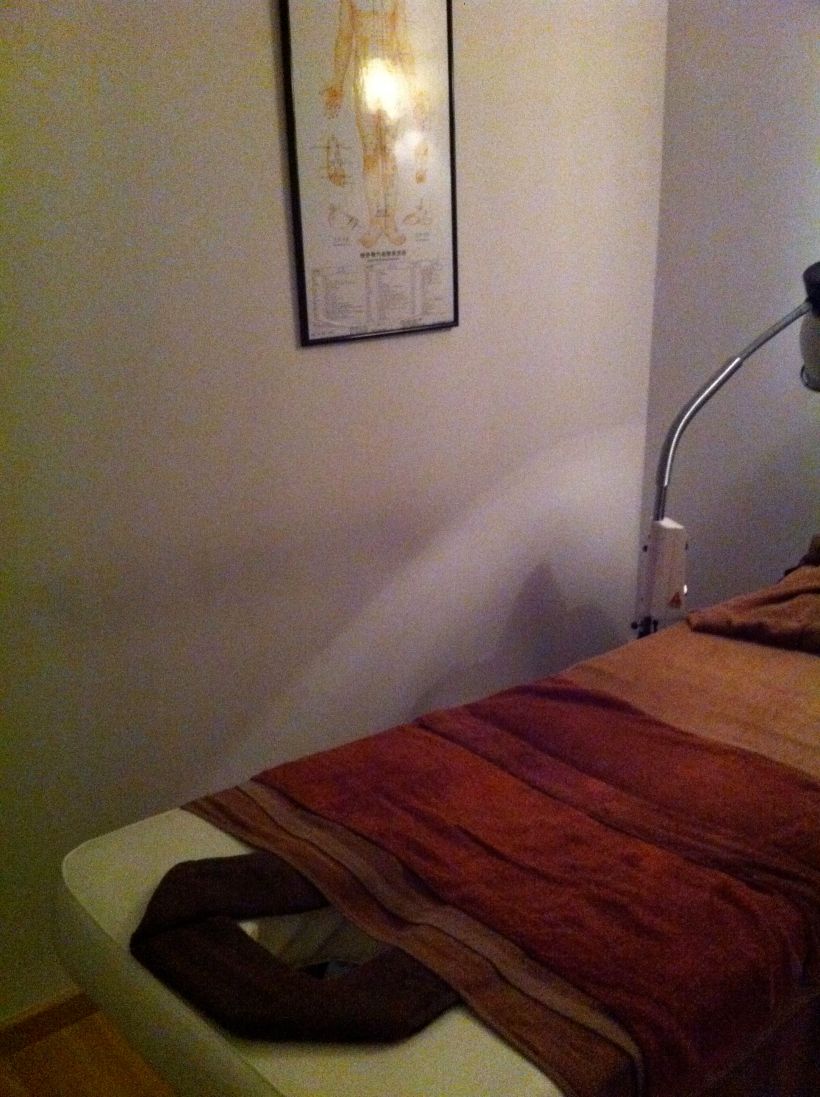 The room and the bed. Functional. And a Chinese acupoint chart.

The worst thing was CUPPING! OMG! It hurt and I teared involuntarily. She told me it was going to be ok and that I hurt because I was weak. Glass jars were placed on my belly, thighs and arms. After that I flipped over and it was placed all over my back. Before that, she took a glass jar and heated the inside with a cotton ball of flame, then slid it up and down my back as it sucked at my flesh. IT HURT HURT HURT!!!! I was told the marks would go away in 3-4 days. Nope… mine took almost 14 days to completely disappear. GGgRrrr ggggRRrr!!!

Apparently I am sick/weak so the discolourations were darker

I did some research and I read HERE that athletes do this all the time. Apparently these are not bruises because a bruise is the result of broken capillaries from impact traumas while these marks are the release of toxins. I don’t know and I don’t quite understand BUT if you can take the pain, I suggest you try it at least once. I suppose it can’t be that bad, it’s probably my own personal reaction to it. The massage hurt like mad but the day after, I immediately had better bowel movements (maybe from the vigorous prodding) and I felt better. Is it psychological? I don’t know.

So was it worth $320? NOPE! But it was definitely worth more than $28 if you understand that Chinese Physicians usually charge more for such treatments. So it’s a good deal, despite the torture, because it was an interesting experience. I was also offered a package deal which was quite expensive at $180 per session but then a 30% discount was thrown in because I came via a website (i.e. streetdeal.sg). The funny thing was I didn’t understand what she was saying and I was wondering why she told me that she’d give me a discount for a night stand. Turns out the sounds for “night” and “stand” together means “website”. HAHA on me again!