More eating out! Yum! Here’s an Italian restaurant highly recommended by me. I was warned that it might not be easy to get a table and might be a tad pricey – both of which were not the case when I was there. Sure, we spent $150 for 2, but it was such a great experience that I felt it was more than affordable! 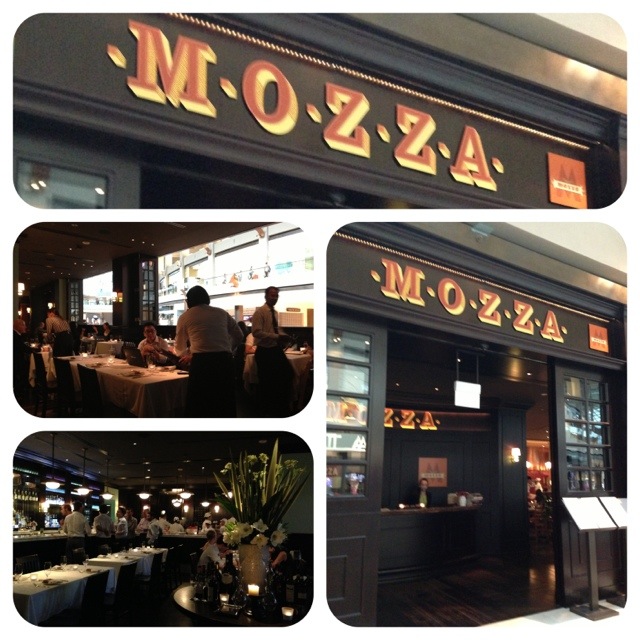 Osteria Mozza is located at B1-42-46 Galleria Level, The Shoppes At Marina Bay Sands. Dress Code: Business Casual (to be honest, many were in short sleeved shirts and some in shorts) 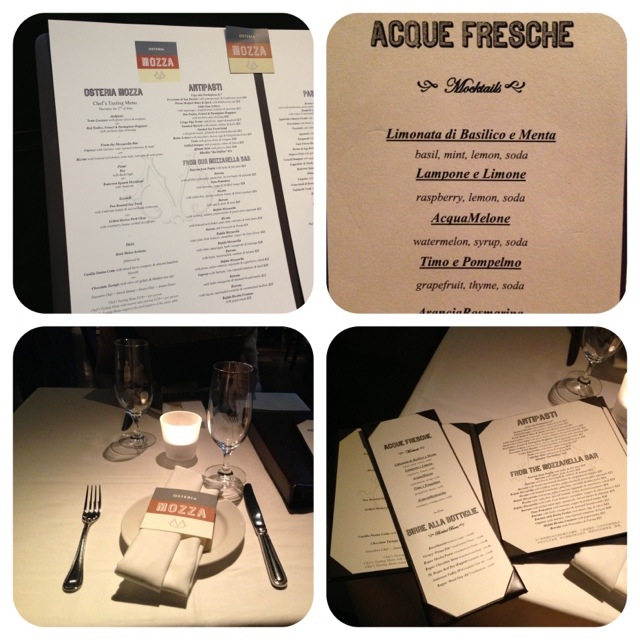 It’s common knowledge that Italian cuisine is very vegetarian friendly and there were more than a few options of starters, mains, sides and dessert. Also having given up the drink (i.e. alcohol), I found myself with a refreshing mocktail from a very interesting selection as well. 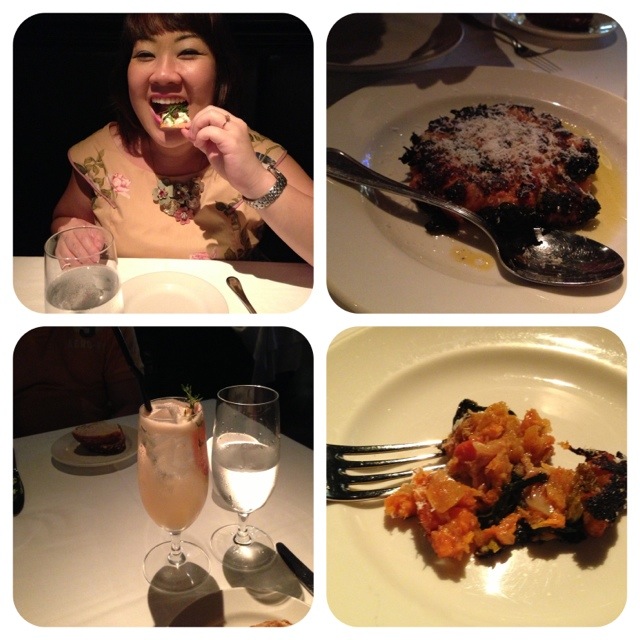 I highly recommend the mocktail called Timo e Pompelmo (Grapefruit, Thyme and Soda) as well as the Ricotta & Egg Raviolo. You know what a ravioli is – a bitesized stuffed italian dumpling. A raviolo is the same thing except 1 big  single parcel 4 times as large. My raviolo had a raw egg in it and upon serving, I was told to cut down the middle (to prevent it from being overcooked on the heated plates). The egg yolk oozed out richly and it was so incredibly delectable. Imagine the chewy outer shell of the ravioli, and the gooey texture of the cheese, all mixed in with the luscious egg yolk. I give this dish a 9/10!

XH and I shared the Ribollita for starters and while it is traditionally a potage/soup, what Mozza did was to cook down the vegetables to a pulp, then pour away the broth to pan-fry it as a patty. Really interesting and I’d like to try making a simple version of this myself with my ABC soup. 7/10! Yum! 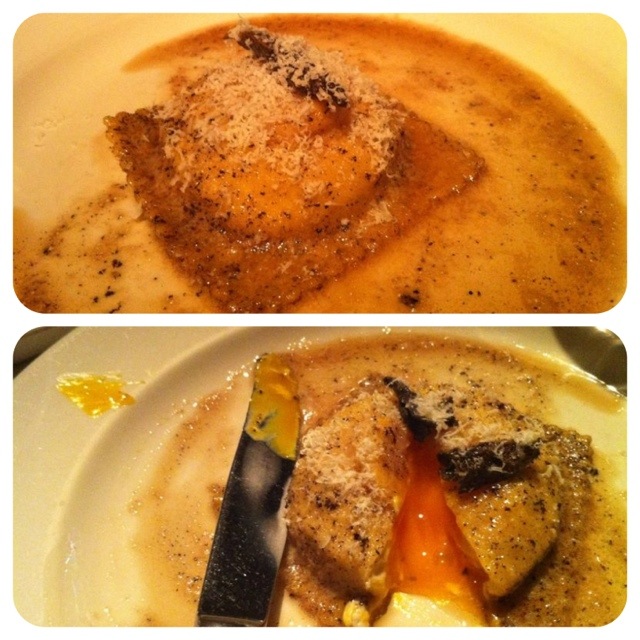 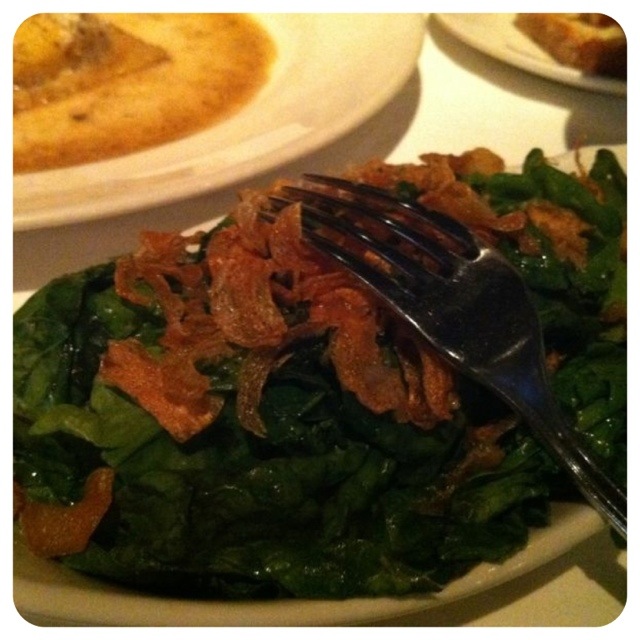 The other dish that we shared was the Sauteed Bloomsdale Spinach which XH termed the “Italian you cai”. “You Cai” being the Mandarin term for a simple stir-fry of oil-tossed leafy greens. The spinach leaves were still plump and I loved how the thinly sliced crispy garlic lent a light flavour to the fresh vegetables. 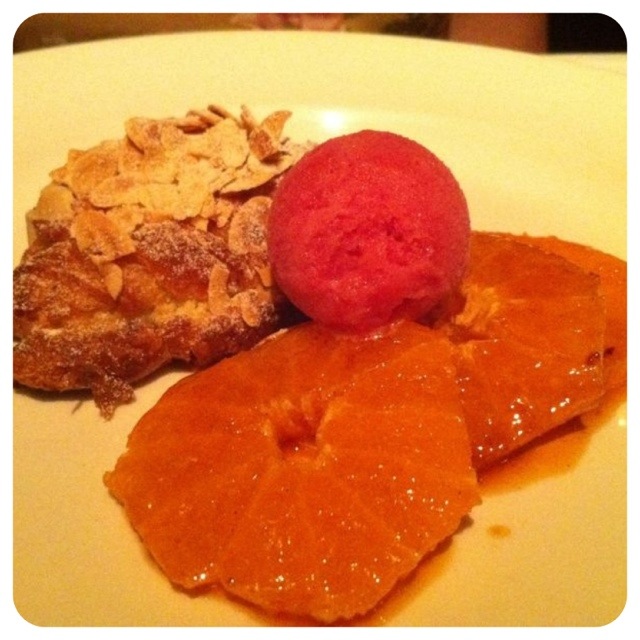 For dessert, we had the Almond Cornetto – a crispy croissant filled with almond paste, accompanied by sauteed tangerines and blood orange sorbet. The sauteing brought out an intensely sweet and tart stickiness in the orange slices which I found most ambrosial!

Our waiter Kroydl (sp?) made such spot-on recommendations that I’d like to commend him on accurately describing the various dishes before we made the orders. He even took time to pick out the various vegetarian dishes and others that he could modify to make fully vegetarian so that I could make a more informed decision.

Great ambience, attentive wait staff and many delectable vegetarian options – overall a delightful and gratifying experience. I’d definitely love to come back to Osteria Mozza again and also check out their flagship restaurant in LA! (That’s a hint for T, since it’s less than 5 hours drive from his house, I mean OUR house in Las Vegas, to the restaurant on Melrose Avenue in Los Angeles!)

One thought on “Osteria Mozza at Marina Bay Sands”