I attended 3 different weddings one after another just in the last few weeks and while I had a lot of fun, they all made me think about mine. Well, specifically whether or not I even want one eventually.

First up was Pearlyn and Rong Zhao’s at Burkill Hall – a historical British colonial bungalow nestled in the greenery of the Singapore Botanic Gardens on 19 July 2013. This was a location that was decided on after months and months of searching for a place with a specific setting she wanted. Before the wedding, I accompanied Pearlyn to the stamp makers shop to collect a custom stamp and red wax to seal her wedding invites. That’s how detailed she was! Pearl and Rongzhao actually registered their marriage officially the week before and then had a Christian ceremony in the early part of the evening before dinner. Pearlyn also invited friends who were musicians to perform and they had a mobile photo-booth as part of the festivities. We were given print-outs immediately after we took the pictures and that was really fun. Dinner was buffet-style and we were seated on the 2nd floor of the venue. The bridal couple made their way from upstairs to downstairs and had different outfits. Pearlyn wore a white designer gown she bought in NYC the year before and also a gorgeous gold kebaya (I think it belonged to her Peranakan grandmother). 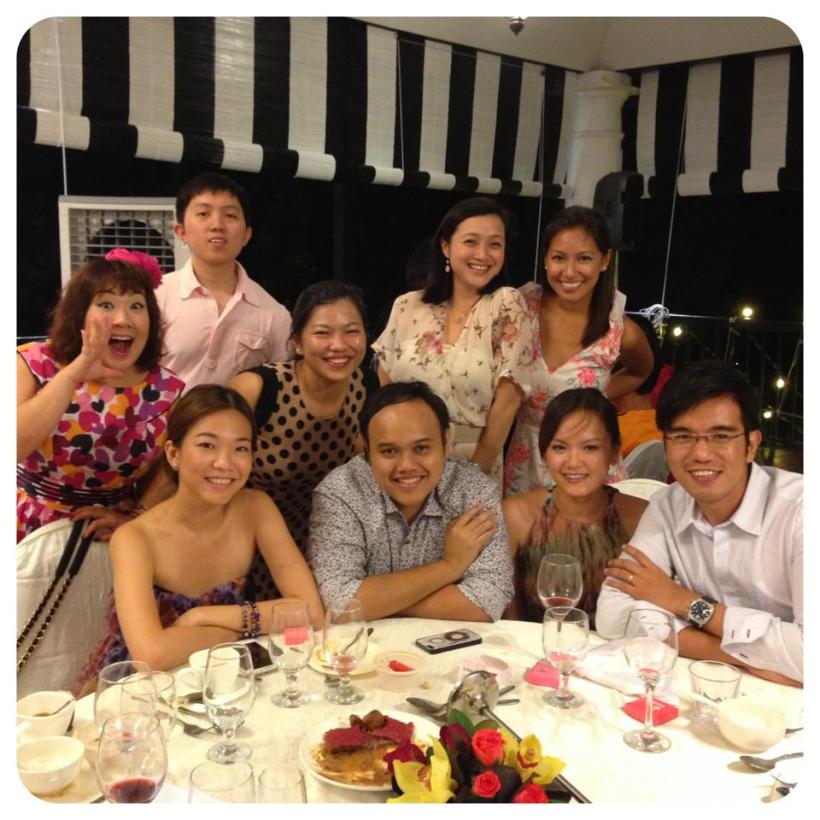 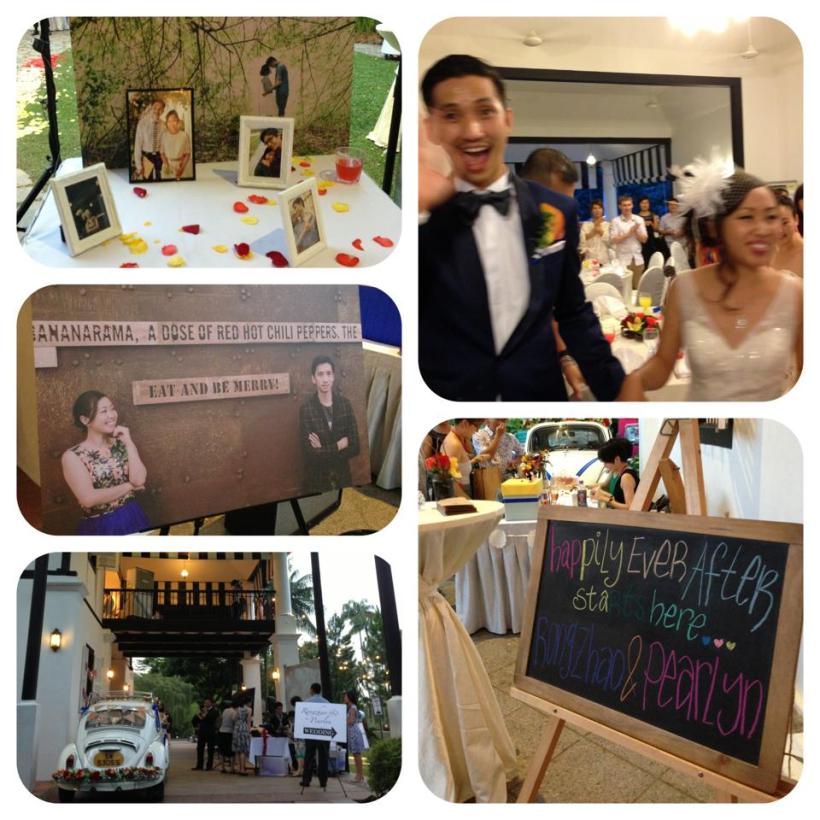 Then last weekend on 3 August, I attend Keat and Adrian’s wedding at the ultra posh Capella Singapore on Sentosa Island which served a seated 7-course lunch. Keat was an ex-colleague and I also ended up working for her part-time for 3 years. She’s one of those go-getter types who wants it all and works hard for everything. It’s no surprise when her husband Adrian mentioned in his speech that she pulled the entire wedding together in 3 months – including a memorable entrance that started with her bridesmaids and groomsmen (total of 12 of them) in co-ordinated and tailored outfits marching in, and then exiting (to my confusion) before dancing their way in again, forming an arch and the bridal couple coming through to cheers and then leading the entire entourage through a dance sequence. Even if everyone had perfect co-ordination, the time it took to choreograph and then rehearse to get it right should take a while, right? Keat also had 2 outfit changes – one white sweetheart neckline gown with the huge tulle skirt and then a bright orange/pink/silver backless Chinese cheongsam type dress. There were videos and slideshows, there was a photo booth with instant printout, even the table group photo was printed and given out almost immediately! 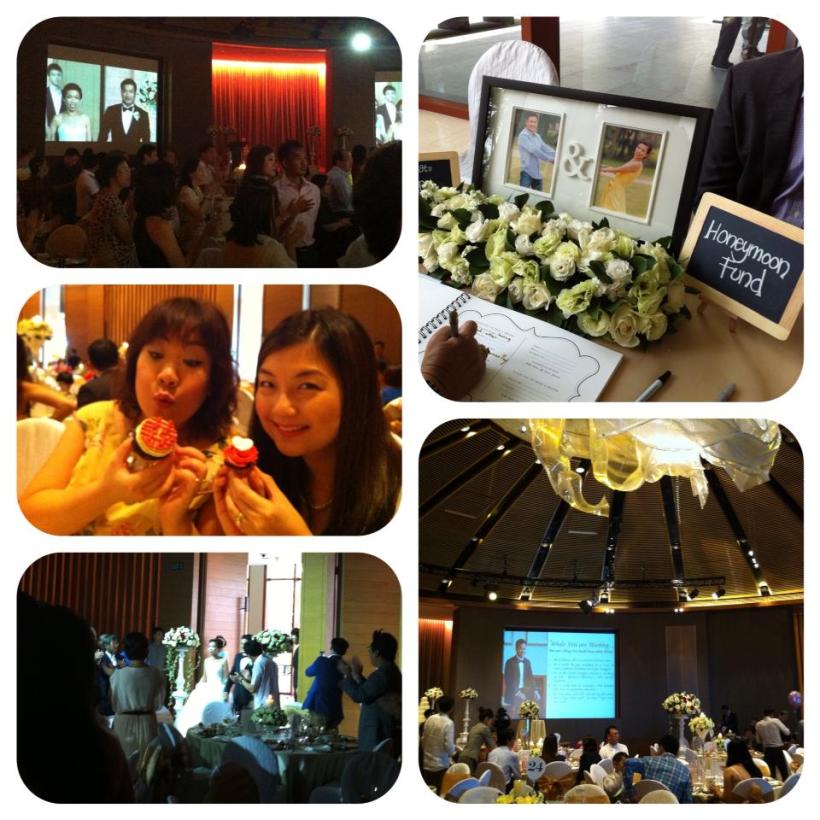 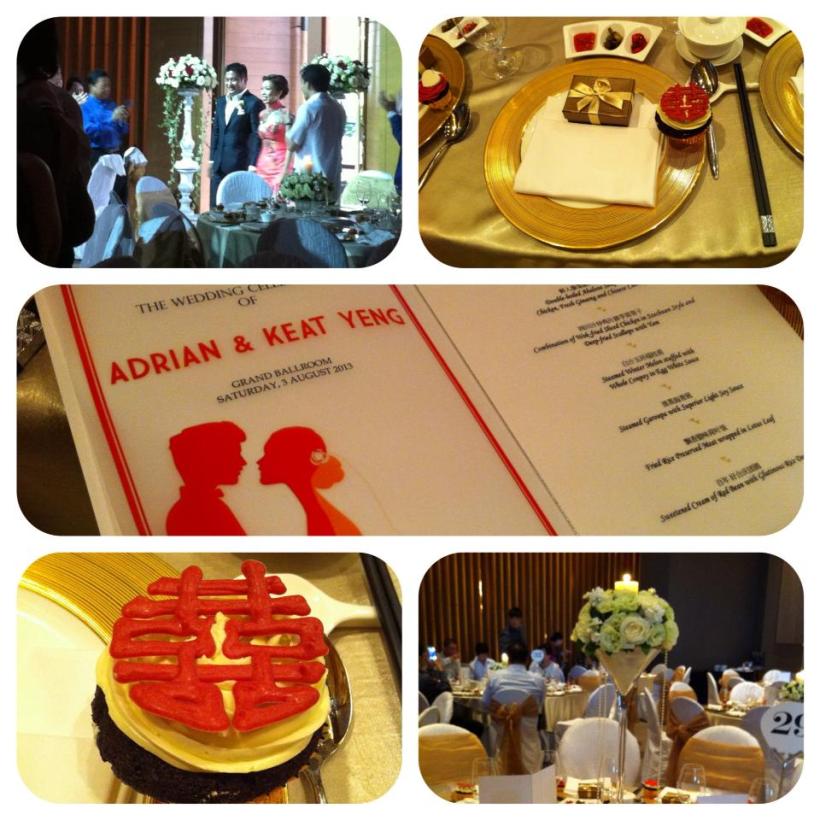 The last wedding I attended was last night – Shawn and Ginette’s hipster (stables, mason jars, 80s music, a video of their cat frolicking around their house and Storm Trooper helmet at the reception desk) wedding at The Marmalade Pantry. Ginette who’s a multi-hyphenate (art school lecturer-designer-DJ-rock chick bassist/vocalist-fashion entrepreneur) had her gown designed by a colleague (a fashion designer/lecturer, I’m assuming) wore her face with simple bold red lips and eyeliner. One outfit, no changes. Shawn wore a blazer with gold buttons (I was looking for his Captain’s hat because he looked like he just came off from sailing). I loved the wedding playlist. I had my inner circle of friends with me. It was a largely casual affair and my favourite bits were the speeches! Shawn mentioned that he didn’t understand why they needed to have a wedding since they registered their marriage a year ago and already own a flat they lived in. But he was glad that Ginette convinced him it was to create another special moment to share – one for them to share the occassion with close friends and family. 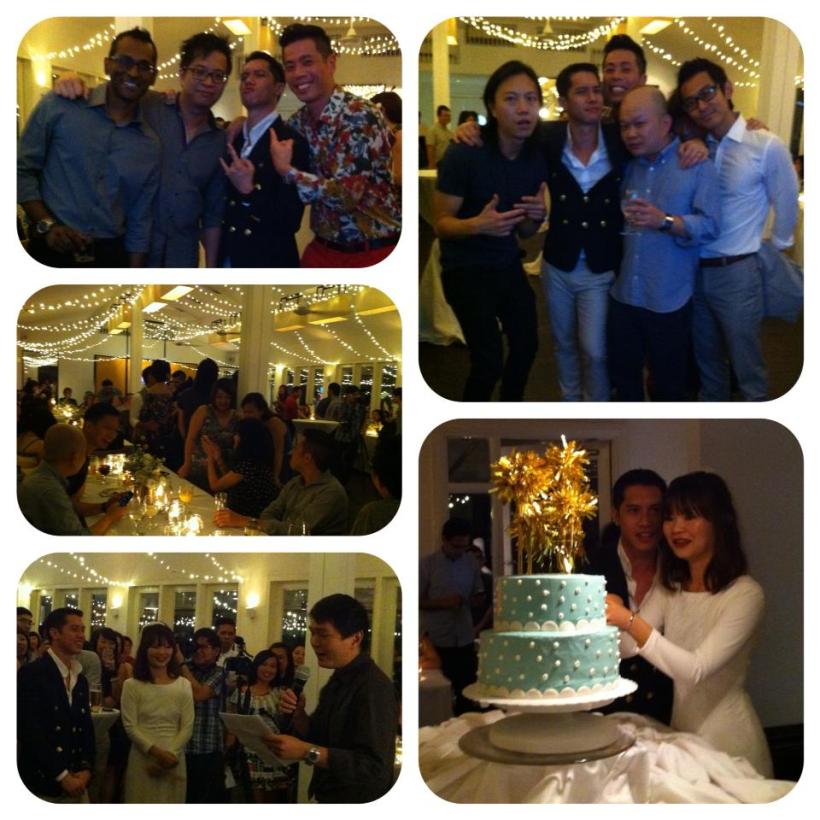 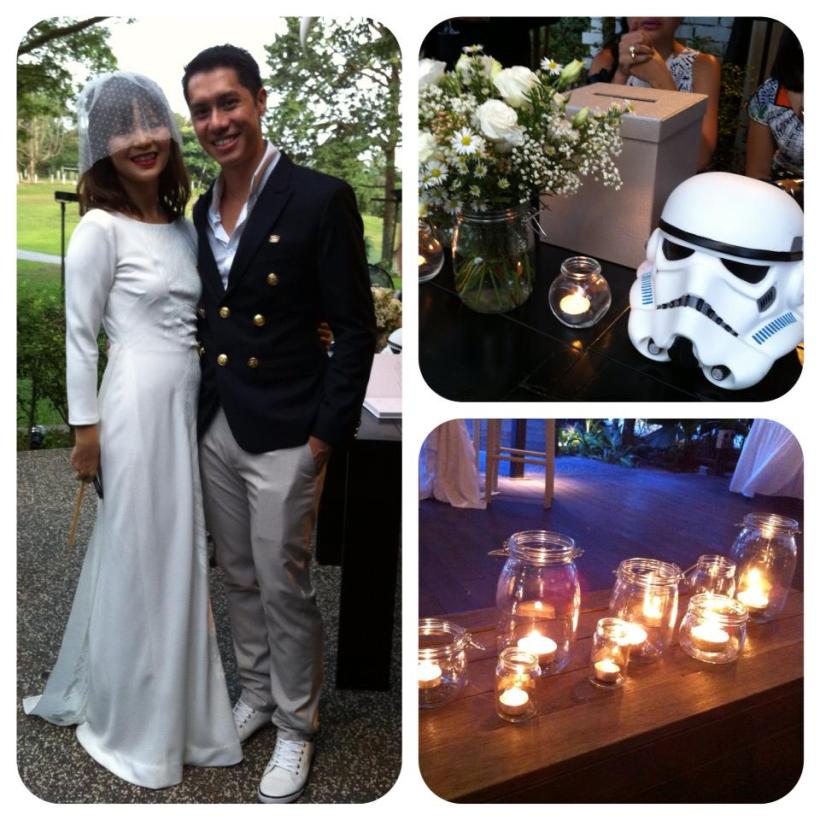 I learnt through my friends that a wedding is a joyous and special day for them to share with the ones they love most. That each wedding should reflect the couple’s personality or what they hope to project. That it’s very stressful and costly to plan one. I go home happy at the end of the weddings I attend because I know how much effort my friends spend to execute theirs. I have learnt from past experiences that I will only attend the weddings of those people I actually like and want to be a part of. The horror stories of those people who “demand” to know why you give them $x for their super expensive wedding have happened to me too. I went to one where the bride rang me after the wedding and asked if I gave them a gift, and how much. People apparently invite “friends” to “fill tables” so that they can get their money’s worth since hotels charge per head, per table. So after close friends and relatives, they will go down the list and invite people who will attend, hoping to cover their cost. But still, I give as much as I can afford… Especially if I have 3 weddings to attend within a month, right?!

Did you know that there are websites that tell you how much the minimum wedding gift should be? Traditionally, S$88 for a Chinese-style sit-down wedding was the norm. These days however, on top of inflation, people are making known how much they spent on their wedding (or at least there are lists floating around on the interwebs). Depending on the venue, the time/date (lunch or dinner, weekdays or weekends make a difference) and your relationship with the couple (you project upwards of your share of the meal e.g. if it’s known that the venue usually charges about S$120 per head, you add maybe $30 or $50 or $100 on top of that). So a bridal couple in Singapore actually recoups at least 70-80% of what they spend and weddings are getting more extravagant.

Don’t believe me? Here are some links you should check out:

I don’t have the money for large weddings nor the patience to plan one and T is too shy to be in front of more than 20 strangers at once. My parents have almost 20 siblings combined and I have about 50 first cousins (half of whom are married with children). I love how my friends were all dressed up, glowing and obviously blissful. I am envious that they get to share a special day like that with everyone they hold dear. So will T and I have a wedding? Your guess is as good as mine for now 😛