As I write this post, we’re preparing to leave our house to visit Max in Calsbad, California. The nurses have been really nice and sending us email updates with photos or calling to tell us what he’s up to. They told us that Max is very happy whenever they take him out of the kennel for walks. Max is such a sweetie pie and he does love having a human friend around all the time. Anyway, on Monday on our drive home to Las Vegas, we dropped by this diner for dinner.

I saw signs for Peggy Sue’s 50’s Diner maybe about 1 hour or 45 minutes before we were even near Yermo, California. The drive through the desert is quite a boring one, if you can imagine a vast expanse of rocks, hills and you know, sky. While the scenery was beautiful, it was same-y after about an hour. Signs for the outlet shopping malls and Peggy Sue’s piqued my interests and perked me up. T said we should go to Peggy Sue’s on our way back, and that was possibly the only thing that distracted me from the sadness of leaving Max behind at the hospital for radiation. 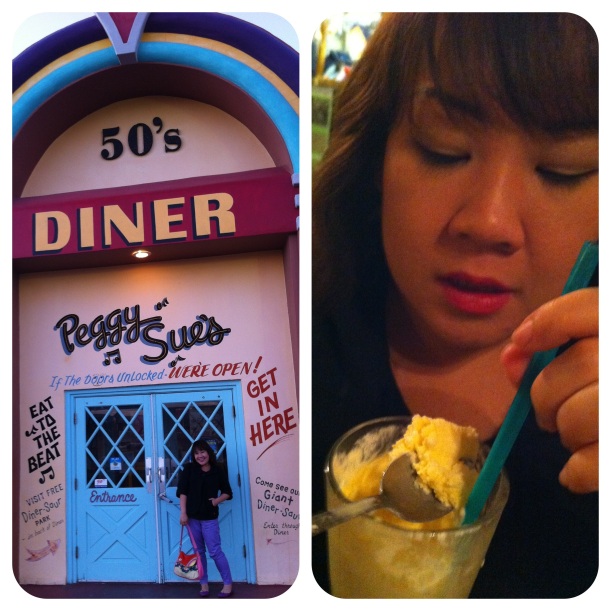 We arrived at about 6.30pm and it was just about getting dark. The entrance was designed and painted to look like an old jukebox. It was a sight to behold because I love kitsch and colours (and also, the surrounding area was basically just dirt tracks and nothing else). Inside, it was kitsch, movie memorabilia and 50s themed everything I’ve ever seen in movies or old Archie comics! There were many tables and we had our pick of seats before the dinner crowd came in about half an hour later.

I must say though, their mannequins scared me. There was one dressed as Elvis with a guitar in hand, one woman (I’m not sure if she was supposed to be a character or just a generic person styled in a 50s outfit and gloves) sitting at the bar counter and several others that spooked me when I saw them from the corner of my eye. Other than the dining area, they also had a store in one wing that sold almost everything kitschy – t-shirts, weird games, snacks, candy, postcards, mugs, keychains etc. 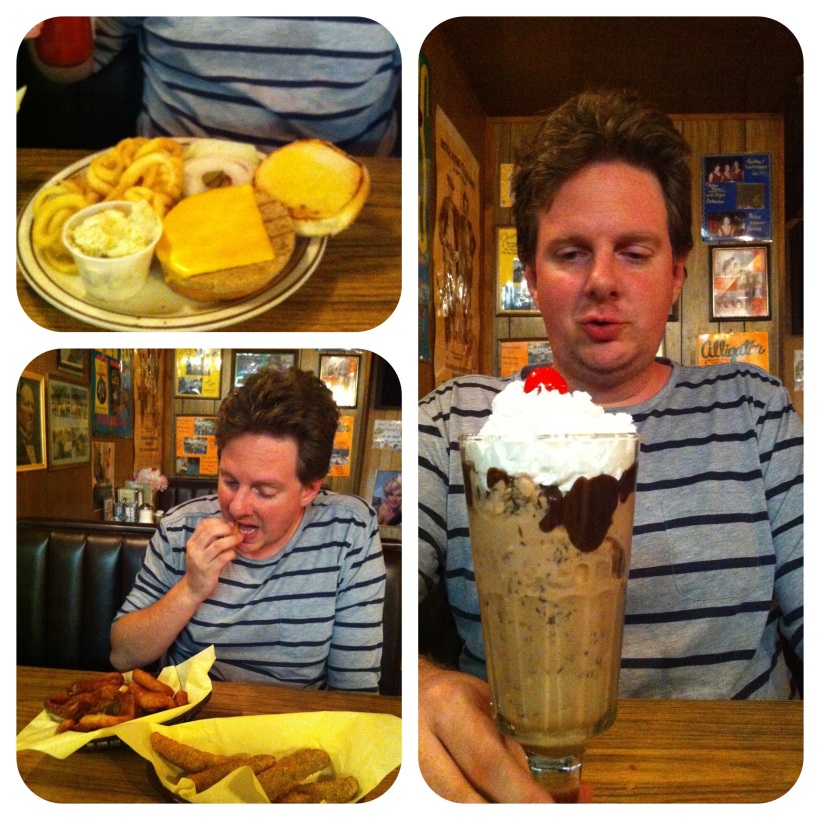 T ordered a veggie burger that came with several choices of sides – he had potato salad and curly fries (is this 50s?). Also, a root beer. I had the deep fried dill pickles (super yum!!!!!) with ranch dressing dip, onion rings (which T said was really good. It’s pretty good to me, but nothing special) and also a rather non-descript corn bread (because other than the corn muffins at Kenny Roger’s, I’ve never had others and T has asked if I could make them). I also had an old fashioned ice cream soda (vanilla of course), just like they had in the old Archie comics (the 50s themed ones, not the updated ones I grew up with in the 80s). While I was full to almost the brim, T still wanted dessert and he ordered a huge-ass chocolate malt ice cream thing with Whoppers for about USD5.

All in all, dinner was so-so.  We paid under USD35 including a 20% cash tip. The food was not bad but I wouldn’t come here just to eat. I love the kitsch and the 50s theme. Even the waitresses had pink/mint green 50s style uniforms! I’d say food 3/5 and ambience 4/5. This was fun though and I can’t wait to check out other roadside diners in future!