It’s official! Details of the first release of T’s much-awaited game Axiom Verge was announced a few days ago via the Playstation blog. The PS4 version will be out 31st March 2015 for the Americas and 1st April 2015 for Europe.

And just today, they also announced that PS PLUS members get a discount during launch week!

If you know anyone who owns a PS4 or loves metroidvanias or retro-style video games, please alert them to it! It will also be coming out at a later date for PS VITA. T is currently working on a PC release so anyone with a PC around the world can purchase a download from Steam very soon!

As I’ve previously mentioned, video games hold no weight in my life – perhaps a little unfortunate for someone who is married to a game developer. I am happy watching from the sidelines.

In the last few days, I have been following comments on both the US blog post as well as the one for Europe. I then made the mistake of going to NeoGAF to read more. While there are many who are genuinely stoked for the game, there are also countless who argue that USD20 is too much for an indie game. Some assumed indie equated to poor quality when compared with games produced by big studios, some mentioned investment value, some others are just too cheap to pay anything more than a pittance. I don’t know about video games but I have never seen people argue the price down for an album from an indie band. How weird is that?

If you like the game, buy it. If you can’t afford it, don’t.

It made me sad to see people questioning the production value of something I’ve seen being slaved over by one extremely lonesome man for 5 years. If he wasn’t spending all his free time working on it while holding down a full-time job, he worked 12hr days for 7 days a week when he finally went indie full-time.

T is precise and meticulous while at work. He is friendly and considerate to those around him though incredibly shy and introverted. He never set out to create a game just for profit. He really truly loves what he does.

On many a night, he would bring his sketch book to bed – yes, he hand draws the scary stuff you see in the game. On others, he would get up at 2am (hours after we’ve gone to bed) and excuse himself (yes, he’s very gentlemanly that way) to go back up to his office to work, often till daybreak.

The game was the centre of his life – until I moved in and we got married. As a singleton, he worked on Axiom Verge every day after work and on weekends. I was determined to entertain myself despite having no friends here, just so he would still have lots of time to do that. If you know me, that required all the self-control I could muster.

About 6 months ago, he left his day job and dived into the development of the game full time – thankfully, with the aid of Sony’s Pub Fund. But without the security of a regular income or health insurance, we had to be more aware financially. I think we have done pretty decently by being thrifty. My grocery budget for food has been about USD35 a week for the both of us. I cook almost every meal we eat except for the occasional meal out with friends or family. And as you know, I’m now a super bargain hunter – despite how much I love clothes, shoes, accessories and cosmetics I haven’t bought anything full priced since I left my job. I obviously can’t afford it anymore. Also, for the first few months after he left his job, we actually went without health insurance and even had to ration the remaining bit of our medications as well as rescheduled appointments until early this year.

I’ve been poorly of late and I’m breaking the small kitty we have with all my medical bills. My dizzy spells and hypoglycemia induced delirium keeps T on his toes.  On top of that, he had to take me to my countless doctors’ appointments and lab work several times a week while trying to finish the last leg of his game so he could launch it. But life is an on-going challenge for everyone – some unpredictable things happen, some as a result of the choices we make. I’m sure we’re not the only ones struggling and it definitely could be alot worse.

My husband is a man who is not motivated by money. He sold his Corvette in a heartbeat to raise funds to treat our dog when he had cancer. Everyone thought he was crazy and told me to talk him out of it. But that’s the man I married. When he loves something or someone, he does it with everything he’s got. We actually talked about selling our house and moving into an apartment if it needs be. I even took pictures of our furniture for online listing! And you know, I’ve told him that if this game doesn’t sell well and takes him to the poor house, I’m going along for the ride.

The game will do whatever it will do. I haven’t a clue on the gaming industry and have absolutely no insight to this genre at all. The fact that it’s completed and he did it entirely by himself is already a feather in his cap. His education, experience and skills shines through the final product. If it doesn’t translate to real dollars, so be it. I married a man who dared to dream and has put everything on the line to see it materialize. And I would like to reaffirm that his conviction to his craft is not for nought.

There is something super attractive about a man so passionate for his work. I love seeing the joy in his eyes when he is drawing, animating and programming. And I want him to be able to do it for as long as he can. We can always go back to Singapore and I will return to work so that he can stay home to work on his next game while helping to raise our offspring. *Koffkoff*

Anyway, what I understand of the game is that, while reminiscent of the art style in Metroid (also didn’t know what this was until he showed me a few months ago), it controls like Contra (this I know) and is influenced by a whole slew of features in other retro games – ultimately boyhood fantasies from the 80s almagamated. 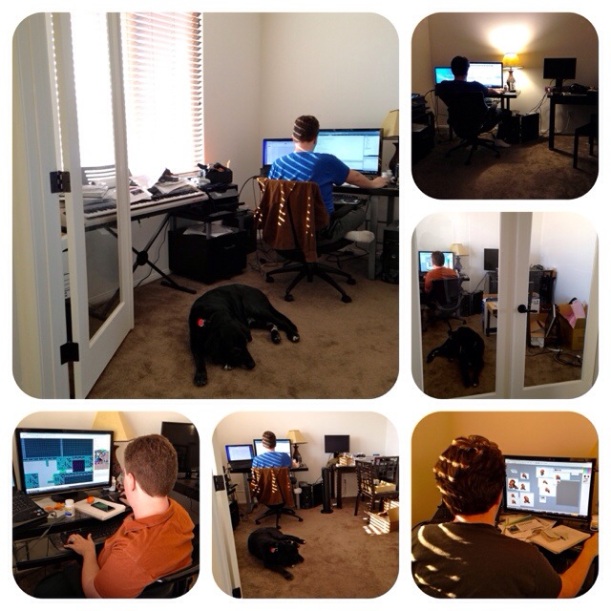 This is a post about how the world of frivolous living (aka me) collides with my geeky husband’s video game career. If you haven’t already read on my Facebook fanpage, my husband has recently signed a publishing contract with Sony Playstation for a game he’s been working on since 4 years ago. He’s still a small-time indie game developer so to be recognised by a major player is a huge deal. I’m so proud of him and his multiple talents!

I love reading the comments from his fans on the Axiom Verge Facebook fanpage and sometimes on the blog entries itself. But since Sony’s announcement, I’ve been hooked on the comments and frenzy by gamers who’ve been following the progress as well as those who’ve just discovered it. There are of course cynics and critics but among the commenters, there are also those genuinely stoked about Axiom Verge.

Here are some of my favourites:

This game promises to be a true masterpiece, pray together my brothers so that it comes out on PC. Amen! – Zhn Nico

@AxiomVerge was easily the standout star of yesterday’s @PlayStation indie blowout. That soundtrack is killer and the game looks incredible – @NOLAnerdcast

Holy crap, this looks amazing! Super Metroid is one of my favorite games ever, and I just had some serious deja vu watching this trailer. Thanks for supporting vita too. I’m torn, I want you to take your time and make it perfect, but I NEED to play it now! – rabidninjamonky

This is going to be one hell of a game that I’ll most likely play for days on end w/o ever stopping to do anything, I repeat, ANYTHING. I wanna play this NOW!!:D:D – Daniel Brydson

And then there’s me – I shamelessly gush about T’s work and I think he’s really talented for doing everything on his own – animation, coding and music. I know I’m biased because he’s my husband. But he truly deserves all his success because when he works at Petroglyph Games in the day, he still comes home every night and work on Axiom Verge for 3 to 4 hours (most days till midnight), and when he works from home, he’s in his office for 10 to 12 hours daily (leaving me to my own devices while we’re in the same house). Even when we’re on holiday, he works on it for hours on the plane AND in hotel rooms! Luckily for the both of us, I don’t need constant supervision and can entertain myself independently. Hahahahha!!

Other than that, I don’t know video games – don’t play, don’t follow. Those comments are a huge kick in my butt for not understanding the extent of what Axiom Verge is and why people are so psyched for its release – that there are unrelated strangers around the world hanging onto every update. My mind is BLOWN!

I don’t care that I didn’t marry a fancy-pantsy $$$ corporate, I no longer live in a fast-paced cosmopolitan city, and the days of fortnightly spa treatments and new clothes are long gone (until I start making my own money again). Life is far from perfect – especially having to deal with unexpected grief in our new family recently. But hey, the universe does what it needs to keep things balanced, right? As we cope with the trials and tribulations that is life, I want us to be able to unabashedly celebrate T’s success while working through our loss.

These days, my narcissism has taken a backseat and I’m enjoying the scenery while riding T’s wave. It’s been months since I’ve posted outfit pictures or anything else. There hasn’t been much to shout about and I don’t really want to bother T with taking my frivolous photos. Honestly, I don’t think he does a very good job. He does what he does well BUT he takes ugly photos of me and doesn’t seem to see it. I guess it’s also a good thing he thinks I look beautiful when I’m not, right? Hahahahahaha!

My world has changed so much since taking a huge leap of faith leaving Singapore and moving across the globe after a whirlwind romance to marry T. I traded in championing indie music to be a housewife and it’s opened up so many new experiences! Far from losing myself, I consider this a privileged opportunity to rediscover forgotten possibilities and reconnect with what is important to me. It took me 10 years longer than my peers have on average to find their partners and I’m not afraid to say that I savour being married! I have a great husband!! I am still my own person but for now I want to dedicate my time to play the wifely unit of the creator of Axiom Verge and put everything in cruise control.

Anyway, what is this Axiom Verge I keep talking about? Here’s the trailer to show you more